skip to main | skip to sidebar

So I just found these cute homemade Peeps at twig & thistle and just may have to try and make them for Easter. However if they turn-out as well as the birthday cupcakes, I may swear off the kitchen all together!
Stay tuned for the results....

I was at the fabric store a couple of weeks ago and decided, while looking at the rainbow wall of thread, that I wanted, excuse me, needed to start embroidering. Immediately. (By the way... I do that with things, get an idea in my head and I don't sleep or eat until I have accomplished it. And after I have gone to bed and am just about to fall asleep, another idea pops up and I am awake for another hour.)
I bought a couple of skeins of thread, some needles, a couple of transfers and some muslin. Since my stitching knowledge goes as far as treading the needle I thought I may need some help, I found this website and her video tutorials were better than any class I could have taken. Quick, easy to understand and I was able to play it back again and again until I had it figured out. A few quick lessons and I was off.
This is my first project, I modified a piece of clip art and traced it on and later added the fabric around the edges to make it a full sized dish towel. 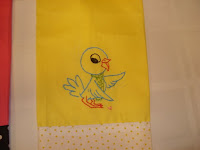 With this one I was hooked and have spent the last two weeks finding anything and everything I can to embroider, I warned my hubs that he may come home to a closet full of stitched jeans - wouldn't you just love a duck stitched on the side of your jeans?? He politely declined.
Here is project number 2 - another dishtowel, still getting the hang of the french knots. 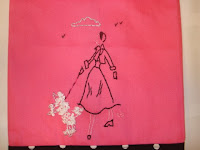 There are several other works in progress.... stay tuned.
Posted by Annie at 12:30 AM 0 comments

Sometimes good intentions get the best of me. I am kinda a plan girl - as much as I would like to be a "fly by the seat of your pants type of gal" - I really need a concise plan of attack and I need to be armed with at least one list and perhaps a timeline in order to be most efficient and successful. Today was a prime example of that.

Today was my baby's 1st birthday party (sniff sniff) and what started as illusions of grandeur ended in disaster avoidance. One hour before the party I had a burned hand, not showered, the boys were not bathed and 12 little things that vaguely resembled cupcakes in my kitchen when I realized my intentions of having the "best 1st birthday party ever" had flown the coop so did my composure. A deep breath, a quick bath and 3 fights with the 3 year old over bath time later the party had begun (albeit with no actual food on the table).
What can I say, had I actually known what kind of cupcakes I was going to make when I entered the grocery store at 10 pm last night I may not have been irritated when I realized that I had just made plain cupcakes rather than the lemon ones I thought I was making and actually bought frosting so when the raspberry glaze I had intended failed miserably I would have had something to fall back on.
So this is what I had envisioned: (via Martha Stewart, (I think she just sets us up to fail, but that is a whole other post!)) 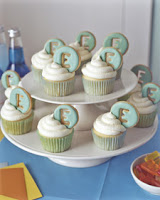 And this is how it turned out (those are supposed to be R shaped cookies, at least I got the frosting color right.) 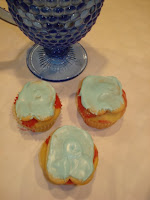 What I must remind myself is that in the end it doesn't matter, he won't remember that his cupcakes looked awful and weren't lemon, nor will he remember that his mama was a scatterbrained basket-case while preparing for the shindig. What does matter is that he is here, and everyone who loves him the most was here today too - that is what I want him to remember.
PS... The birthday crown and tee-shirt I made him earlier in the week turned out darling, so that obviously counts for something! 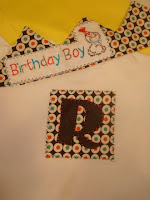 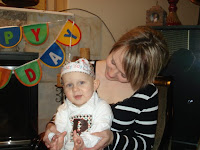 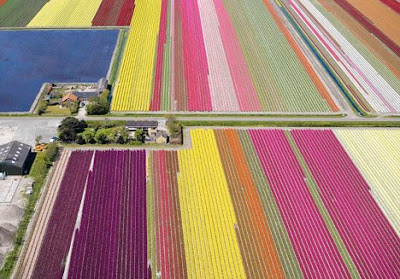 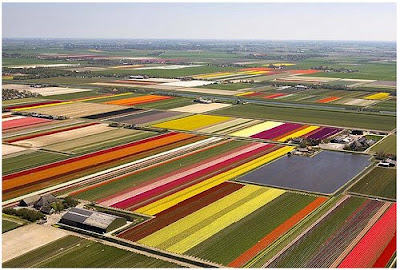 The other morning I woke up to the sound of birds chirping rather than Geese honking, yesterday I noticed the willow treee behind our house is the faintest shade of green - all signs that spring is immenent....

I found this picture at forty-sixth at grace of tulip fields (can you believe it??) read more here. 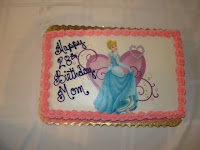 a very special cake from a very special boy
I had a birthday last month, a good one, one that exceeded my imaginary "grown-up" age by 4.
Inspired by hot diggity blog here is a list (or perhaps for tonight a list in progress) of 28 things I hope to accomplish before I am 29 - I better hop to it, only 10 months and 2 weeks to go!
Posted by Annie at 10:22 PM 0 comments

Here it is, something I've been mulling over for some time now. I spend a considerable amount of time online, especially late at night, when the house is quite and I can hear my thoughts. My Favorites folders are full of good intentions; things I have come across and love, want to own, want to create, things that inspire me. Here is where I will share them with you, hopefully you will be inspired too.

I am a Mama, a Wife and a girl with creative juices bubbling over, I have decided to bottle them and put them here for you, for me, for anyone. Consider this my online inspiration scrapbook, I only hope it inspires you too.